‘At the start of 2014, at the lovely Janelle Redgwell’s insistence, I decided to come to do my first class with Angela; it was difficult, as it turned out I had vastly overestimated my fitness levels…as in I fell over, twice! I did come back however, over the year I was sporadic at times, turning up some classes twice a week, some none, then back again after a gentle nudge from Angela. I got slightly better at the classes as in I didn’t get quite so sore, but I wasn’t overly committed or very self motivated either. 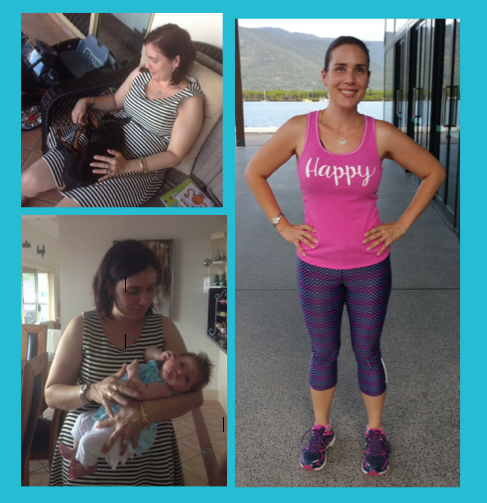 I got to December that year and I was the largest I had been in some time, my clothes were bursting at the seams and I wasn’t feeling very good about myself. I saw that Angela had her first 21 day challenge and I decided to jump in. I followed the daily exercises, committed to training 3 times per week with Angela and did some exercise on my own as well; the other thing I did was convince myself that I was totally accountable to Angela, in that if my results were not good enough that she would not be happy with me. I also managed to convince myself that I was slightly, ahem, ‘afraid’ of Angela, also adding further fuel to the fire. I clued Angela in to my epiphany and instead of fighting against become fit I asked Angela to help me become fit.

Boy, did I get some results and coming into and through 2015 I kept the training up, curtailed some of my naughtier eating habits and participated in all of the 21 day challenges. I started to notice big changes in how I felt as I found that I had more energy, I focused better at work, managed stress better and I even slept better at night! Angela pushed me to be better, to work harder and get more out of each class. I became stronger and fitter and I got a real buzz from finishing all of the allotted tasks from each class, even if I grumbled about it during and afterwards! Strangely the harder Angela pushed me the better I liked it. I had lumpy times through the year but Angela was there to help me get back on track, with encouraging words when I needed it and tough love when appropriate. Angela was also a fountain of information when it came to diet and nutrition, busting food myths and coming up with good sound nutritional advice when I asked.

In making myself accountable to Angela I gave myself a way to change my attitude about exercise also and instead of exercise just being something that those ‘fit people’ did, with Angela by my side every step of the way, I changed and became one of those ‘fit persons’. I even got the Studio A Team Member of the Year Award! Possibly the best thing about the exercise was changing how I felt about myself; my self confidence came back in leaps and bounds and I like what I see in the mirror looking back at me. Since December 2014 I have lost nearly 14 kg and heaps of cms and side benefits – clothes shopping is much more fun! In the end though, I learnt it wasn’t about reaching a magic number, because feeling this good about yourself is priceless!

I owe my success to Angela entirely, her enthusiasm was and is still contagious as ever, I look forward to continuing training with Angela, PT Clare AKA our smiling assassin and Studio A in 2016 and beyond.’